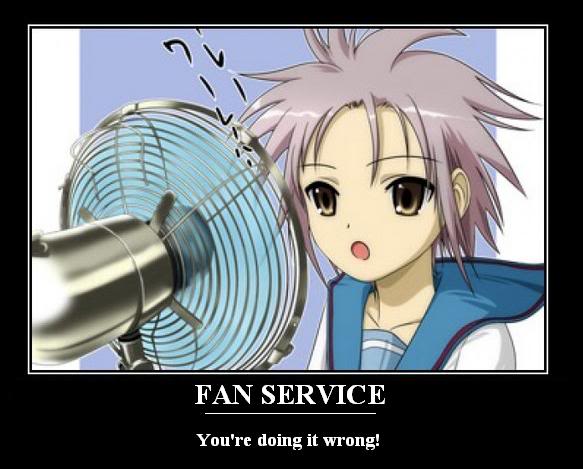 The concept of sexuality in anime is quite a debatable topic. There are those who find ecchi quite offensive and demeaning to women, while others don’t find any problem with it and enjoy the fan service along with it.

Ecchi has always been one for controversy in the anime industry. It usually involves one guy that unintentionally gets himself into dodgy or sexual situations with girls – this is mostly in the form of sexual innuendo. There are also instances where you’ll get the occasional pantyshot or girls wearing skimpy or revealing outfits. Although these elements fall into ecchi it’s how the creators use these elements that make or break a series.

I remember reading the Love Hina manga series a long time ago. Keitaro, the main character, always got himself into situations that weren’t his fault and got the occasional uppercut from some girls that sent him flying up into the air. What made the series a success was the story. It had a clear direction where it wanted to go and the ecchi elements added to the story – I can’t imagine Love Hina without ecchi, it just wouldn’t work. These days, most anime include ecchi just for fan service alone and not to enhance the plot. The story isn’t clear, events happen randomly and the creators force sexual encounters with girls just for the sake of fan service.

Ecchi has been highly criticised because it presents women as sexual objects and not people. Yes, that is the case, but I don’t think of it that way. I find that ecchi is a way for Otaku – especially guys – to experience the fantasies they always wanted to have in real life – in a less over-the top way. In all the anime that I have watched, which included ecchi, I have never seen the main character turn into a sex-obsessed monster or rapist. On the contrary, he turns out to be one of the sweetest and kindest guys any girl would want to have and this is evident when the girls start falling for him later in the series. This is my view on ecchi, but you are more than welcome to agree, disagree, or add on to what I’ve said.