The concept of self-care is twofold: while the word literally means taking care of one’s self, it also involves taking some sort of action when doing so. Whether these actions are positive or negative, there will always be consequences. However, there is also the grey area of whether an action can truly be seen as good or bad. Suicide, for example, can be seen as an example of an action that may fall into the grey area. While, for the most part, suicide is considered a bad decision due to the fact that the person committing it will leave behind their loved ones and their dreams and aspirations, in the mind of the victim, suicide may be the only choice they have left to receive “self-care” [NOTE: I am not advocating for suicide here. As a person who has had suicidal thoughts in the past, I am talking about what thoughts could potentially go on inside a suicidal person’s head]. This idea of what constitutes as “good” or “bad” is one of the driving points of Martin Scorsese’s seminal film, Taxi Driver, which also featured a young Robert De Niro in the titular role.

Taxi Driver tells the story of Travis Bickle, a Vietnam War veteran who gets work as a New York taxi driver upon his return to the United States. Travis suffers from various mental illnesses, particularly PTSD (Post-Traumatic Stress Disorder), depression and insomnia and mostly spends his time watching porn films at the theatre and thinking about how much New York has become a vile and dirty city. He becomes so disillusioned with the city that he feels that he needs to be the one to take action in order to make New York “a better place”. He does this by trying to save a runaway prostitute named Iris, whom he feels needs to be saved.

The film draws interesting connections between New York and Travis’s character. As mentioned above, Travis sees New York as a vile and dirty place and this is illustrated by how it is depicted in the film. In one instance, we see Travis drive past a group of prostitutes walking down the street while commenting on how “all the animals come out at night” before saying how “someday a real rain will come down and wash away all the scum on the streets”. The “real rain” he refers to is himself and this monologue foreshadows the events that come later in the film. In extension to this, Travis’s apartment is a very dirty, run-down and messy place, with fast food boxes scattered around the room and newspapers sprawled all over his bed. This illustrates how cluttered, broken and twisted his mind is and how he has simply forgotten to care about himself. However, New York is not just seen as “doom and gloom” for Travis.

Early in the film Travis meets Betsy, a campaign volunteer for Senator Charles Palantine. Travis becomes infatuated with her and eventually asks her out for coffee. Here, Travis is smartly dressed in a red jacket rather than his drab brown jacket that he is wearing at the start of the film. The area around him also seems more clean and organised compared to how New York is initially depicted. In this instance, we can argue that Travis is in a calm and happy space, considering that he is on a date with a beautiful woman. However, this calm and happy mindset quickly disintegrates when Travis takes Betsy to the theatre to watch a porn movie, after which they immediately break up. Because Travis believes that he lost the only good thing left in his life, he starts a downward, destructive path towards violence. 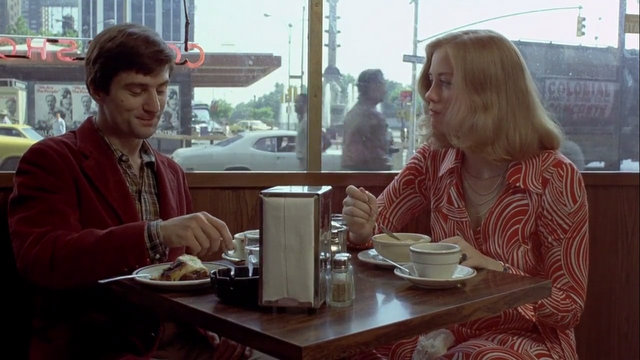 Travis’s break up with Betsy starts to make him more disillusioned with New York and his sense of reality starts becoming blurred. While driving around in his taxi he runs into Iris, an adolescent prostitute who is trying to run away from her pimp. After witnessing this, Travis makes it his mission to save her, without knowing whether she truly wants to be saved by him or not. As such, he buys some guns from an illegal arms dealer and starts exercising in his apartment. He then creates a modified contraption which allows him to quickly draw his gun from underneath his jacket and starts to practice drawing it out in front of his mirror (this is where you’ll find the famous “you talkin’ to me?” scene). At this point, Travis has become too consumed by his negative thoughts and feelings to turn back now, so much so that he starts changing his look by sporting a mohawk and an army-green jacket, almost reminiscent of his military days.

One of the first violent acts that Travis tries to commit is assassinating Senator Palantine at a political rally. This could be interpreted as Travis getting revenge on Betsy for leaving him, since she has a lot of respect for Palantine. However, the Secret Service agents at the rally notice that he is acting suspicious and chase him away from the rally. Next, he invades the brothel Iris is staying at and tries to save her by starting a shootout. The scene is violent and gritty, almost resemblant of Travis’s own twisted psyche. Travis manages to kill the pimp and his men, but he sustains heavy injuries from the shootout and Iris screams in horror at the violence she had just witnessed. Before the police arrive at the scene, Travis tries to commit suicide, but his gun has run out of bullets. When the police arrive and before he faints from his injuries, he puts his finger to his head and mimics the sound of gunfire. 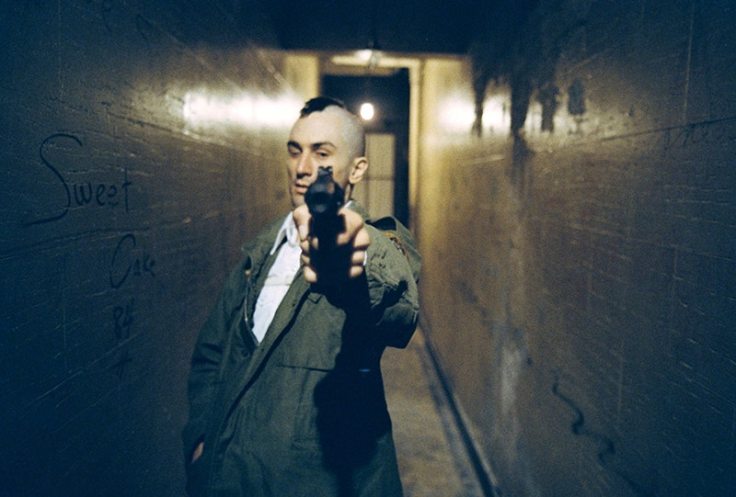 When reading the shootout scene, it is initially hard not to see Travis’s actions as being noble; sacrificing himself to save someone else. However, this is where the grey area of his actions comes into play. While his actions are noble in cause, they are also violent and destructive in nature. If we look at how Iris reacts after the shootout, she looks at Travis with horror and fear rather than as a hero. The question that then arises is this: was there another way for Travis to handle the situation? The answer here would be no because Travis is using his experience from the army to handle the situation i.e. killing. However, we should also consider the fact that society has not been kind to Travis since he returned to the United States, making him feel isolated and alienated from society. In this regard, we can then read Travis’s actions as a way for him to try and assimilate himself back into society by trying to do good.

Taxi Driver is a film that may require more than one viewing in order to fully appreciate and comprehend the various themes and messages it addresses, particularly through the actions of Travis. It is not an easy film to watch, but at the same time it is also a rewarding one. The film is considered one of Scorsese and De Niro’s best films together and it easy to see why. Coupled with a minimalist, but haunting, jazz score and you have a film that is very reminiscent of a neo-noir film. While Taxi Driver does not address mental illness in explicit detail, the character of Travis Bickle makes for an interesting character study on how one’s negative mindset could easily send them on a destructive path if left unchecked.

If you enjoyed reading this, be sure to check out Jack’s Blog Tour on The Aniwriter. For a full list of blog tours happening this month, check out the OWLS Bloggers site.

The Best Place for Anime, Manga and Video Game Content

A straw-made nest for anime, its music, and wishy-washiness.